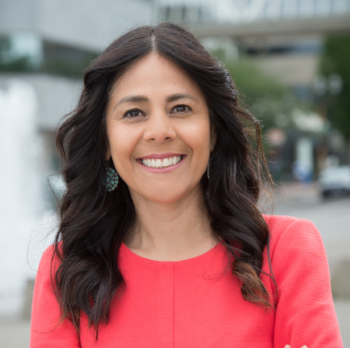 The Salem Chamber Board of Directors Vice President of Business Advocacy Wendy Veliz will share her inspiring story and impart lessons learned with the Chamber Business Women group this month.

Veliz is an employee of Portland General Electric (PGE) where she works as a Local Government Affairs Manager on the Public Affairs team.  Her current responsibilities include managing utility and business issues that impact PGE’s operations with local municipalities both within PGE’s service and operating service territories.  She focuses on the strengthening of community partnerships with local governments and community leaders in support of thriving and healthy communities.

Wendy is a third generation Latina who grew up in Woodburn and now resides in Aurora with her family.  Her family settled in Oregon’s lush Willamette Valley more than 60 years ago when her parents and grandparents migrated here from Texas to work in the fields.  Wendy spent summers working in the fields as a farm worker alongside her siblings, parents, and grandparents.  There she gained an appreciation for hard work and a strong focus to gain an education and work towards a better life.  Her desire to make a difference is deeply rooted in her passion and personal commitment to giving back to the community through helping friends and neighbors.

She has served on an array of public policy boards throughout the Willamette Valley and Oregon during her career.  She currently serves as Aurora City Councilor, Chair of the Oregon Community Foundation’s Latino Partnership Program, is a member of the Oregon Stand for Children, Farmworker Housing Development Corporation, and Salem Chamber boards. She has served two terms as board chair of the Oregon Council for Hispanic Advancement (OCHA), was a member of the State of Oregon Commission for Hispanic Affairs, Oregon Parks and Recreation Commission, and the United States Commission on Civil Rights/Oregon State Advisory Committee.  In 2007, Wendy was named as one Portland’s “Forty Under 40” Young Professionals by the Portland Business Journal.  In 2005 she was awarded the Heart of the Community award for her community service by Hands on Portland and the Portland Trailblazer organization and was also selected for the Extraordinary Board Member Award (35 and under) by Portland Monthly Magazine.   Wendy was also selected as the first woman of color to be named the “Outstanding Young Woman Professional” for the State of Oregon by the Business and Professional Women’s Clubs.